Burns Wharf Theatre Players have presented seven shows since its inception in 2008. If you'd like to relive the experience or get a taste of what you missed, have a look at the image gallery for each of our shows. 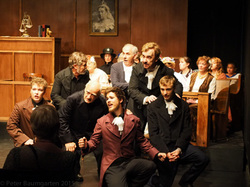 Trial by Jury, Gilbert vs. Sullivan - 2015
The 2015 season marked our first production away from our home of Burns Wharf and into the Debajehmujig Creation Centre. We didn't change the name of our theatre company, but we did have to change venues. Our ninth production brought the one-act, Trial by Jury to stage and an original script written by Ray Scott that pitted Gilbert's words against Sullivan's music.

Ruddigore - 2013
One of Gilbert and Sullivan's least known musicals, became one of The Players' biggest hits. As a spoof on the classic melodrama, the good became bad, the bad became good, and the action, comedy and music never stopped. Our theatre got a major boost with a new lighting system that allowed for some incredible special effects that had our audiences gasping. 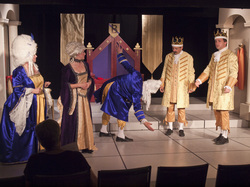 June, July 2012
Beautiful music, fantastic costumes, a great set, and apparently the acting was pretty good, too! The Gondoliers was The Players fifth Gilbert and Sullivan production to hit the stage. Containing some of the most intricate music to grace a G&S show, The Gondoliers was a hit with audiences and the cast alike. 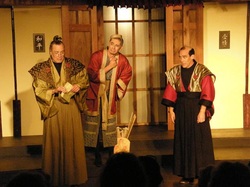 June, July 2011
The Mikado is Gilbert and Sullivan's most popular comic opera. Set in the fictitious town of Titipu, Japan, the story takes a humorous look at death. Although all G&S pieces are filled with memorable tunes, The Mikado has a number that still resonate with audiences today. "Three Little Maids", "The List", and "Titwillow" are three of the more famous numbers. With the popularity of The Players growing, the company put on their largest number of shows - fifteen in total. The audiences loved it! 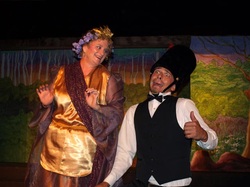 June, July 2010
In The Players' third season, the company turned its attention to G&S's most magical comic opera, Iolanthe, a story full of fairies and dim-witted members of the English House of Lords. A beautiful ward of chancery, Phyllis, becomes the attention of a humble Shepherd and every Lord in England. Fairy magic weaves its way throughout the plot, finally bringing the story to a wonderful conclusion.

June, July 2009
After the huge success of H.M.S. Pinafore, the Burns Wharf Theatre Players decided to give Gilbert and Sullivan another try by putting on The Pirates of Penzance. In G&S's fifth collaboration, this comic opera opens with Fredric, a 21-year old who is just finishing his apprenticeship with a band of soft-hearted pirates. Upon his departure, he quickly meets Mabel, the beautiful daughter of a major-general. He is prevented from furthering his romantic pursuits when the Pirate King informs him that he is still indentured to the pirate band because his birthday falls on a leap year and therefore he is only 4...and a quarter.

The Pirates of Penzance Image Gallery 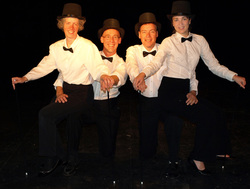 August, 2008
Broadway and Beyond was a fast-paced variety show featuring numerous Broadway musical numbers from shows such as Les Miserables, Singing in the Rain, Grease and Oliver. But as the title implies, the cast went 'beyond' Broadway. In some cases, way beyond.

Broadway and Beyond Image Gallery 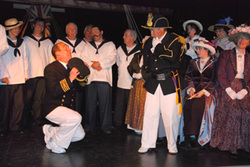 May, 2008
In H.M.S. Pinafore, W.S. Gilbert satirizes the snobbery and hypocrisy of the English social system of his day. He tells the story of a lowly able seaman named Ralph who has fallen in love with Josephine, his Captain's daughter. Josephine, however, has been pledged by her father to Sir Joseph Porter, First Lord of the Admiralty.
Uncertain of the recepton the Players would get for their first production, only 3 shows were scheduled. These sold out one month before opening night. One extra show was added and that sold out in hours. The company quickly realized there was a demand for live musical theatre on Manitoulin Island.